We've been to Zion a lot and one thing we've learned is that it's unpredictable and filled with surprises.  We always find something unexpected.  And, the weather forecasts for the area are almost always unreliable.  The Colorado Plateau seems to have a mind of it's own and creates it's own weather, however and whenever it wants.  This trip made that more clear than ever.
We kept checking the weather forecasts before the trip and throughout each day of the trip.  Every time we looked it seemed to have changed...even in a few hours.  Then, what was really going on with the weather never matched the forecast.  One day, partly cloudy with a 10% chance of rain resulted in downpours of rain.  The next day was predicted to be sunny with a 30% chance of rain...not sure how rain works with all sun and no clouds!  It turned out to be partly cloudy but with less rain than the day before.  And, temps were cooler than predicted the whole time we were there.  We experienced some pretty high winds one day.  It even snowed in the higher elevations!
The chilly temps created opportunities to wear hand knitted hats and cowls.

We were surprised how green everything was and how many flowers there were in the middle of Fall.
It was probably from all the rain they've had the past few months.  It looked like Spring!
The roadsides were lined with these gorgeous yellow flowers... 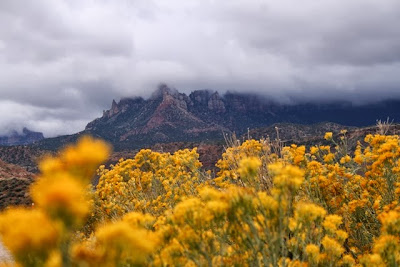 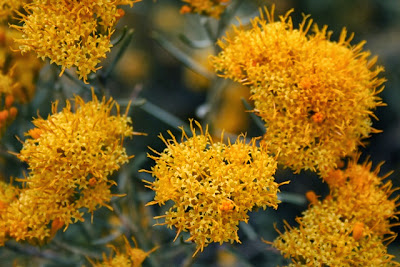 We got there at the right time to see them at their peak.
A week later and they were fading fast... 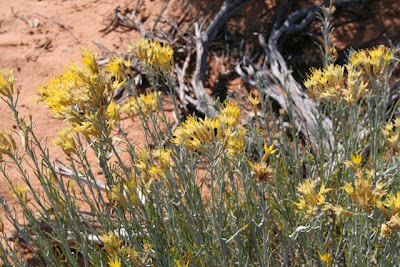 Look how big the flower bushes were.  They're taller than a deer! 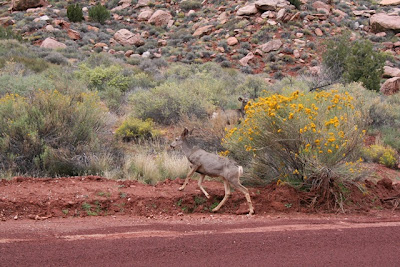 One thing that is predictable for the Zion area is that it's always incredible and gorgeous. 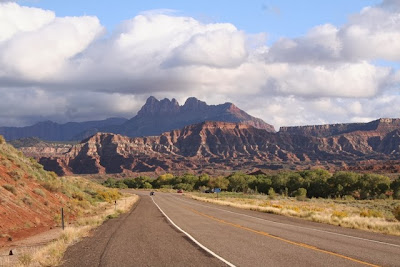 Zion National Park was closed for the first week we were there because of the government shut down.  We weren't sure we'd get to go in at all.  Luckily, a highway runs through it and that remained open.  We were determined to see what we could of our favorite park...even if it was only from the seats of our SUV.  No one was allowed to stop or get out of their cars while driving through. 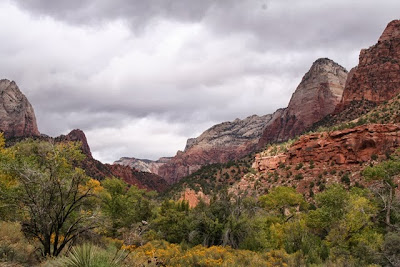 The leaves on the Cottonwood trees were just starting to turn gold when we arrived. 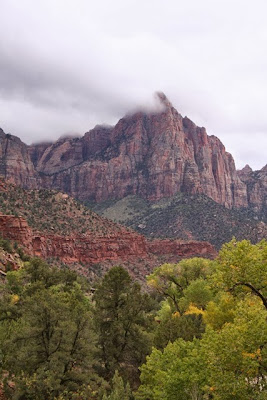 I love how the clouds are gently caressing the tops of these massive sandstone rocks/mountains... 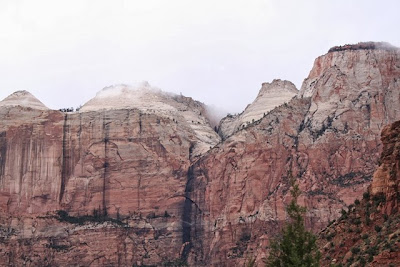 We drove into the park and up through the tunnel to the east side of the park.
The Fall colors were turning more quickly up there. 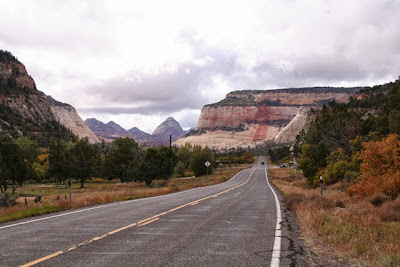 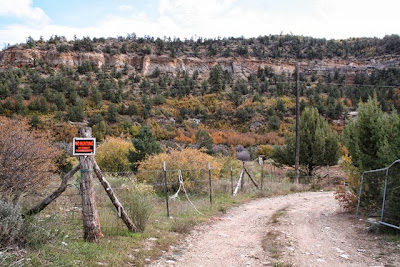 I'm always amazed at all the colors in the sandstone...pinks, whites, golds and sometimes even green. 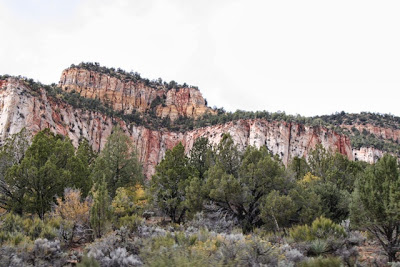 There's a word we always say a lot when we're there..."WOW"! 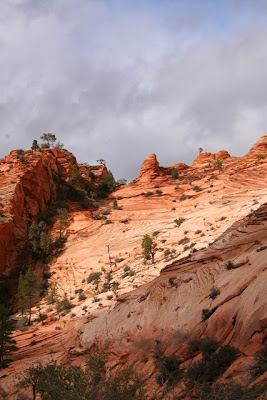 As we headed back down and through the tunnel we snapped a picture of Pine Canyon.
It's that crack in the earth in the center of the photo.  That's our canyoneering goal.
It's supposed to be spectacular down in there. 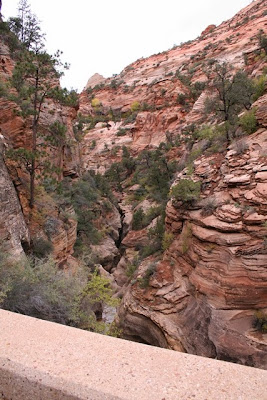 Since the park was closed, the few people that were driving through drove very slowly to enjoy the
scenery.  That included the drive through the tunnel.  The tunnel was built in the 1920's and runs through a sandstone mountain.  There are a few openings/windows here and there.  Since we were all driving so slowly, it made it possible to snap pictures of the view through the tunnel openings.
That's something we'd never be able to do when the park is open. 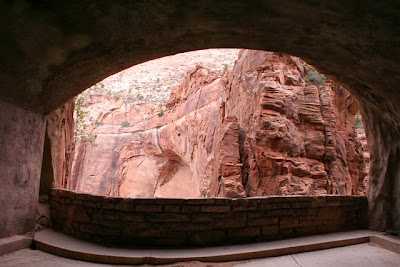 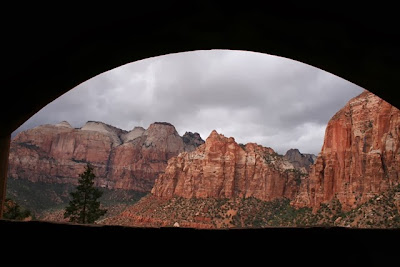 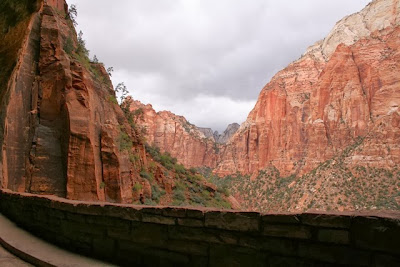 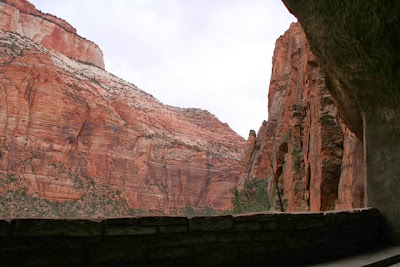 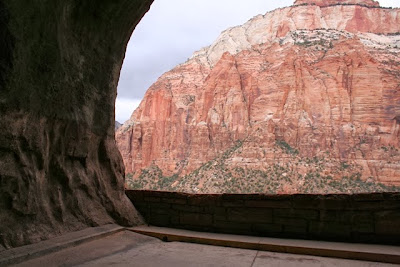 One of the many amazing views as we came out of the tunnel
and back into the main part of the park... 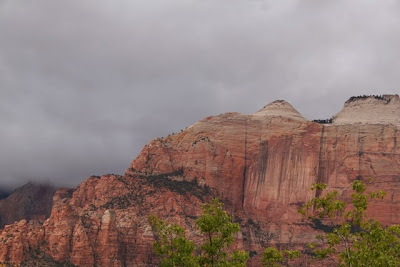 One week into our trip brought the wonderful news that the State of Utah had stepped in
and struck a deal with the government to re-open the National Parks in their state.  Go Utah!
The park and nearby town of Springdale quickly went from a ghost town to being filled with
grateful and happy visitors.  We quickly went in for a visit and hopped on the tram/bus for a ride.
We love the tram.  Each tram plays a recording that's filled with lots of interesting information
about the park, geology of the area, and so much more.  The scenery and views are awesome.
There are even windows in the roof!

There were a few more down pours of rain that day.
It only added to the beauty and magic of the surroundings. 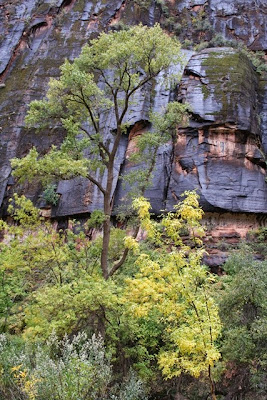 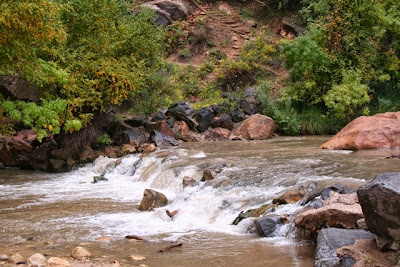 We got off the tram at the lodge just as the rain began to pour again.
We got some hot drinks and sat under a shelter and enjoyed every second of it. 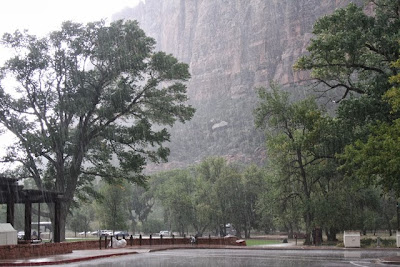 I'm saving the most spectacular photos for my final post of the trip.
The next post will be filled with spectacular Fall color from the Kolob Terrace.
Posted by Acorn to Oak at 1:32 PM
Labels: travel, utah, zion national park

I LOVE Zion! We have been there hiking before and really enjoyed Angel's Landing. We are hoping to go back next spring.

These photos are just breathtaking!! I've enjoyed reading about your bike riding and this post of the drive through the park. I've never been in this part of the country before, and you've really shown its beauty. Love the windows in the tunnel ... just like a framed picture. Can't wait to read & see more! Wendy x

These photos are just breathtaking!! I've enjoyed reading about your bike riding and this post of the drive through the park. I've never been in this part of the country before, and you've really shown its beauty. Love the windows in the tunnel ... just like a framed picture. Can't wait to read & see more! Wendy x

WOW is right! I had to look at these photos a few times!

Pat and I have always planned to go to Zion, now I really want to go! Beautiful! Thanks for sharing your trip!