My daughter is a harpist and will be transferring to a conservatory/university this Fall as a music major.  The excitement about the school she will be attending is already high.  But, then, you add on the opportunities that are already coming her way because of it and....WOW!  It's incredible!  She's thrilled!  We're proud!  Sometimes life can be better and bigger than dreams!

She found out about a month or so ago that she would have the opportunity to perform in the Walt Disney Concert Hall in Los Angeles.  She was super excited!  This is a place that she wanted to visit and only dreamt of playing there...maybe...in the far future.  She and some of the university students were asked to perform with a local...and I must add...VERY talented...youth symphony for a music festival.  She received her music, quickly learned it, bought a new gown, attended some rehearsals last week and we were off to LA early yesterday morning for the BIG day.

I thought the concert hall sounded interesting but seeing it in person is amazing!  It's beautiful!  Unfortunately, I didn't bring my camera because they aren't allowed inside.  So, I had to settle for taking photos with my cell phone.  Some of them are were taken at an angle in an attempt to get as much into the photo as possible.  They aren't bad but I'm not sure that any photo could truly convey the magic of visiting this place in person.

It was smaller than I had imagined but the lines were so beautiful that I couldn't stop looking at it, taking pictures, and saying..."WOW!"  It's truly a work of art in every way.  Even the accoustics inside were amazing!  They didn't need microphones of any kind.  In fact, we were told that if everyone was quiet and a pin were dropped, everyone would be able to hear it.  We've noticed in other concert halls and theatres that it's often difficult to impossible to hear some of the instruments...especially the harp.   Not here!  We could hear every instrument...beautifully.  During the concert, I kept catching myself in such amazement at the music, the talent and the concert hall that my mouth was open...it was jaw dropping!


Here it is from across the street... 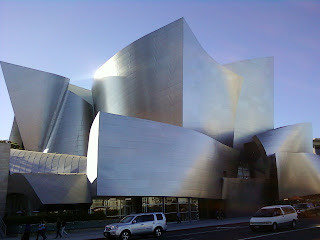 This is the main entrance on the corner. If you look carefully to the right and just above the top of the stairs,
you can see tiny holes for lights that spell out, "Walt Disney Concert Hall"... 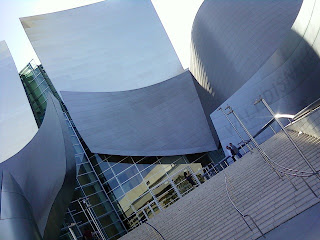 More photos looking above the entrance... 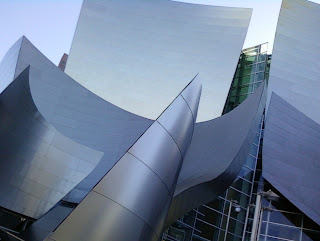 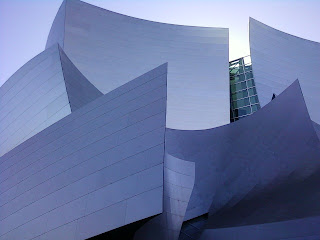 Every where you look is beautiful.  And, with each step you take or tilt of your head, the lines
and beauty change to create another view that's hard to resist photographing. 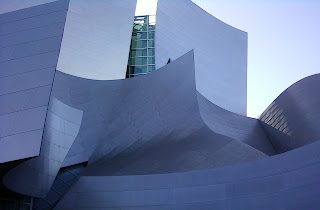 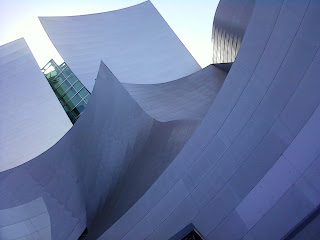 I love how the pictures I took in the morning look blue.  So pretty! 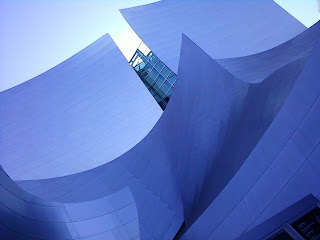 The music hall is nestled in the middle of downtown Los Angeles, amongst skyscrapers and freeways. 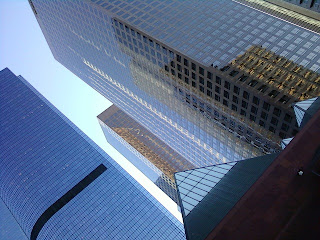 I honestly did not expect to experience so much magic yesterday! I absolutely want to visit this place again for another concert...maybe the LA Philharmonic! If you ever get a chance to go...don't miss it!


Of course, a lot of the magic was because my daughter was a part of it all.  She looked goreous in her new gown (pictures are still on her camera) and she did a fabulous job. The orchestra and conductor she performed with were amazing as were the pieces they played. We're so proud of her and so excited for her. We're looking forward to what's next and attending more orchestra performances that she will be a part of.

I've been working on trying to find new clothes to update and spruce up my wardrobe.  It's not an easy task.  I often shop for hours and leave with nothing.  So many of the styles in the stores are awful!  The prints, the looks, the colors...ugly!  And, often, when I do find something, they don't have it in my size.  I'm remaining hopeful though.  I keep believing that somewhere out there is a store that has things I'll love, in my size, and in my budget.  It may be unrealistic but it's my only hope!

I have a special event coming up...my daughter will be performing at the Disney Concert Hall in downtown Los Angeles.  Very exciting!  But...what to wear?!  I'm a casual, jeans kind of girl.  I have very little in the way of fancy, special event type of clothing.  And, my one pair of fancy shoes died at the last event.  The heal broke on one of them.  Not bad, considering I had them for over 12 years.  That meant I needed clothes AND shoes!

I couldn't let the difficulty I have with finding clothes and shoes get to me.  I was on a mission and I had a deadline!  Believe it or not....I got lucky!  I hit our local Ross store at just the right time...they must have just gotten a new shipment of dresses.  I found about a dozen possibilities to try on and ended up bringing two of them home.  One is perfect for the upcoming night at the symphony.  It's a nice little black dress.  The color is perfect for a night time event.  The length is just right...the bottom of my knee.  And, it's comfortable.  Oh...and, it was only $15!

Next...shoes!  I'm amazed that I had luck with that too!  It's a miracle!  It's also a little weird...I bought heels!  I haven't done that in soooo long!  But, they fit perfect and they're sooooo cute!  Luckily, I won't have to walk or stand very much so they should be fine. 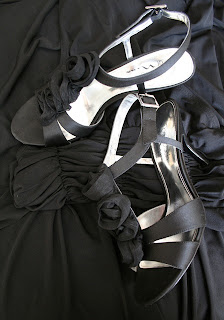 This outfit is very different from what I wear day to day.  I'm going to be feelin' quite fancy tomorrow night!

My daughter recently hit the jackpot too.  Being a harpist means she's always on the lookout for gowns to perform in.  They need to be both beautiful and affordable.  And, for orchestra, they also need to be black, long and have 3/4 length sleeves!  That's not easy!  We went shopping a couple of weeks ago to see if we could find something for this special event.  We popped into a David's Bridal store to see if they had something.  Well, they not only had something...they had several possibilities and they were on the clearance rack.  Three dresses went with her to the fitting room.  Two of them looked great!  Then, the sales lady told us that not only were they on clearance but the sale would take another 40% off!  What?!  Really?!  We bought two!  So, she'll be feelin' quite fancy tomorrow night too.

I love the luck we've had with these fancy clothes....now...if I could just find some great new jeans and cute tops to go with them!  Oh...and some new casual shoes!
Posted by Acorn to Oak at 4:51 PM 7 comments:
Labels: clothing, shoes, style

Our Airedale, Salsa, went with us to San Diego for our family reunion.
There was so much to see and do that she got a little tired.
In fact, she was having a hard time keeping her eyes open.
But, I'm pretty sure she was still listening to everything! 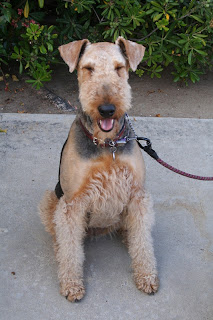 Eventually, it got the best of her and she couldn't stay awake anymore.
Back to the RV for a little shut-eye. 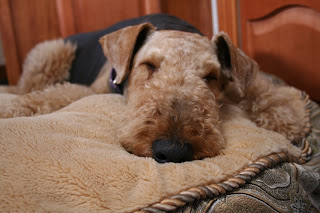 I think her nose was even tired from all the extra smelling she did
to catch all those new and interesting scents. 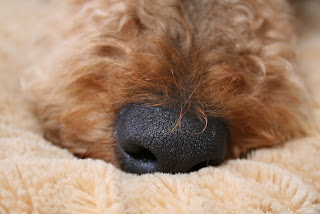 I just couldn't resist a close up of that cute nose!

Posted by Acorn to Oak at 8:09 AM 3 comments:
Labels: airedale, dog, pets, salsa

We just got back from spending a few days in San Diego.  We went down there for a family reunion and had a great time with family members who drove in from various parts of Southern California and flew in from Washington, Oregon and Texas.  We enjoyed lots of food, drink, and visiting.  And, the weather was wonderful!

On Saturday night, I made a pitcher of Sangria.  I've tried a few different recipes in the past and they've all been good.  This time, I decided to wing it and it turned out to be the best one so far!  It went quickly and I went back to our RV and whipped up another batch.  I'll definitely make this one again and again!  Here's what I did...

Into a large glass pitcher, I added...

Gently stir and enjoy!  It can be served right away but the longer it sits the better it tastes!

Sangria is so much fun to make because there are so many possibilities and it's so delicious to sip on hot summer days.  I saw a recipe last week that included a Serrano chili.  Hmmmm?  That sounds interesting!  I might give that a try.
Posted by Acorn to Oak at 9:11 AM 4 comments:
Labels: drinks, Sangria, Trader Joe's, wine
Newer Posts Older Posts Home
Subscribe to: Posts (Atom)