Decorating Bravery and Using What You Have

I've long had the problem of worrying what others will think or judge about how I decorate home.  I've worried to the point of not doing much of anything.  Crazy, huh?!  I also hesitate because I don't want to fail and end up with results I don't like.  Well, I recently tried to stop worrying and started to just go for it.  It can be hard because I find myself going back and forth in my mind between trying not to worry and thinking of what's "in" and trying to figure out what I'd really like to do in my own home.  I'm hoping it'll get easier with practice.

One brave move I made was to finally hang my red plates.

I love transferware!  I've been slowly collecting it over the years.  I initially fell in love with blue ones.  However, when I started collecting them I found myself loving the red/cranberry color too.  So, my collection of those two colors began to grow.  I hung a few on the walls years ago but a collection of the red ones grew and just sat stored away because I just couldn't figure out where to put them.  They don't exactly go with the colors in our home.  Red is one of the colors we have in our decor but it's not quite the cranberry red in transferware.

There was some space in our dining room for them.  And, I noticed that the cute little noses on this bunny painting we have just happen to match the plates perfectly.  I played around with the arrangement for a few weeks but didn't want to commit out of fear it might not look good and it didn't  perfectly match the rest of the house.  Finally, one day, I just made myself go for it.  I made a decision on a layout and began pounding nails into the wall one by one until I had this.... 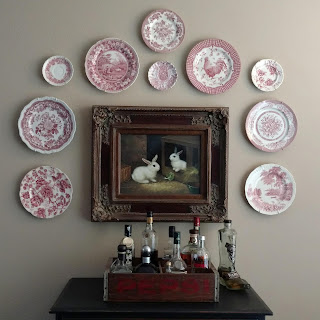 I absolutely love it!  I often sit on the side of the table facing it just so I can stare at it.  It's so pretty!  And, no, it's not the right red but the painting across the room has some of this color in it along with the red-red that's in other parts of the house.  That sort of ties it together.  And, I think that's good enough!  Especially since I love this so much!

This is also a great example of use-what-you-have to decorate.  I imagine I'm not the only one that has things tucked away here and there that aren't being used.  Or, things that can be arranged differently or in a whole new way or area.  I've been noticing this past year or so that I often think of something I'd like to get or an area I'd like to decorate and find that I already have something that will work.  It's such a great feeling!  Not to mention a great money saver!

Sometimes it's something that may work out great until I find something to replace it or make it even better.  This photo is a good example of that.  The dresser isn't exactly what I want for our dining room.  I'd prefer a buffet or hutch of some kind (which I had something closer to that idea but it works better in our craft studio for now).  However, I just haven't found what I want yet and I'm a budget shopper which means it may take even longer to find.  So, for now, the dresser will work.

The Pepsi box is another example of using what we have.  I'd been watching for a nice wood tray for a bar but never found one I loved.  We had found this box at an antique sale and it worked great for our bar.  So, that's how we're using it.  It's not quite big enough but we can at least keep our most used spirits in there.

How do you approach decorating?  Are you fearful of what others will think to the point of not doing much decorating?  Does fear of it not working out make you hesitate?  Do you decorate with what's currently in style?  Or, are you brave and bold and just go for it and do your own thing?  Are you budget minded and go to thrift shops, yard sales, and antique stores?  Have you found joy in using things you already have?  Have you always approached it in one of those ways or changed over time?  Our homes are ours and we should enjoy them in that way....as a reflection of us and who lives there.  Although, it's not always easy.  I'd love to hear your thoughts!

Posted by Acorn to Oak at 11:38 AM 5 comments:
Labels: decorating, transferware, use-what-you-have decorating

It had been years and years since I dressed up for Halloween.  I finally did this year and it was so much fun!  I dressesd up as a witch.  Of course, I had to get pictures.  I seem to take pictures of everything.  But, before I got a picture of my whole costume I had an idea I wanted to try first.  And, it worked!  I'm so excited about this picture...I'm flying! 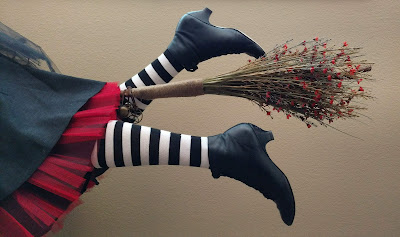 Here's my whole costume.  It was hard to get it all in one picture with that tall hat.  So, I leaned over to try to get it all.  I made the broom recently.  It's made with a dried rose branch with the thorns removed, some faux flower/grass bouquets from the craft store, jute, a little left over leather for the handle, and a stone glued to the top.  Oh, and a glue gun!  My daughter had this vintage dress that worked and looked so cute for my costume.  However, clothes from those days had such tiny waists that the zipper only went part way even though the top closed.  So, we wrapped me up in black tulle to cover the open area.  It created a bit of a bustle in the back.  That was a fun little bonus.  The hat and socks are from Michael's.  And, those little witchy boots I've had for about 30 years.  I've worn them so much over the years that they've even had repairs and parts replaced.  It's fun when you can create a costume with things you have.  I love how my costume turned out! 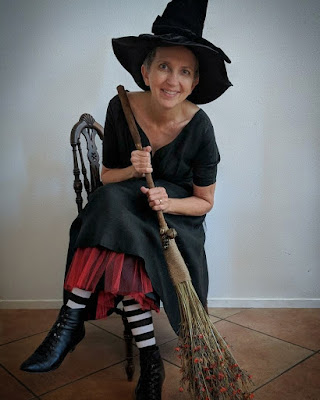 My daughter created hers entirely with things we had...the clothes, boots, and even the crazy wig.  She even painted the t-shirt the night before.  It was a never worn logo shirt hubby had gotten from work and thrown into the rag bin.  I'm amazed at how great she did at painting it!  She's a heavy metal rocker from the 80's.  And, of course, she had to get a pic with her harp.  She's a harpist that does amazing and surprising things with her harp.  Yes, rock, blues, Latin...all kinds of cool music. 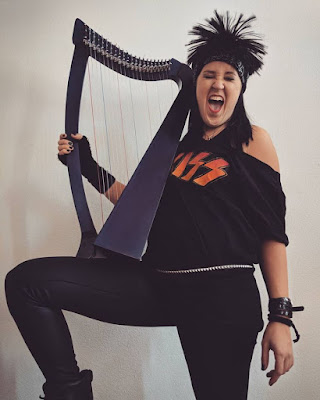 We wanted to go somewhere wearing our costumes and decided to share the fun with my mom who is in assisted living with Alzheimer's.  She loved it!  We even brought her a sparkly witch hat.  She laughed so hard that she had tears in her eyes. 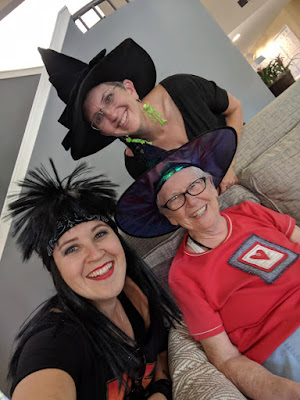 I found some Halloween craft kits at Michael's and we brought those for some crafty fun.  She struggled with tthem a bit but had a lot of fun!  She's always been a very crafty and talented person but hadn't crafted in a long time.  We weren't sure how she'd do.  This was a bit of a struggle but it worked.  We'll be doing more crafts with her around Christmas. 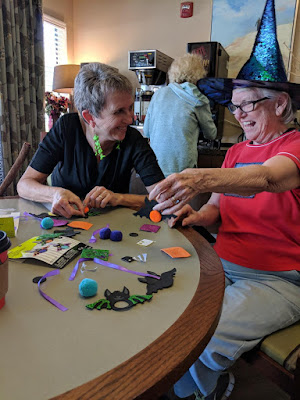 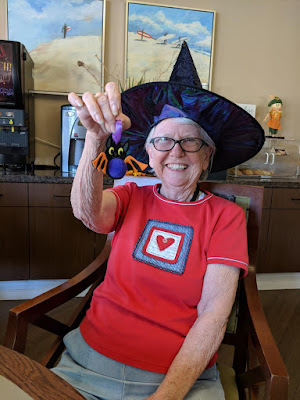 We each made two bats. 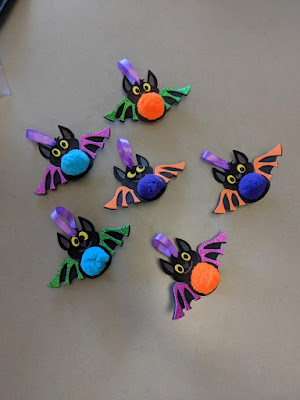 She thought they'd be fun as earrings. 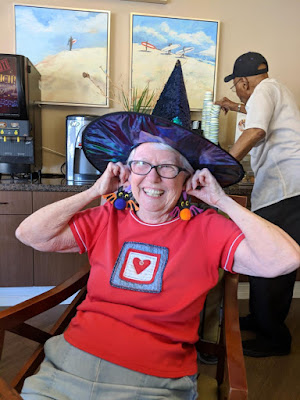 After that we took them up to her apartment to decorate with them.  Then, we took her to the Halloween party they were having for the residents.  She had a good time and so did we.

It's been a tough year.  In a nutshell, my father had become increasingly ill and weak.  He fell in March, went on Hospice in April, and passed away in May.  Since then I've worked hard to get all of my mom's surivor benefits, and everything else straightened out for her.  It was so much more work and stress than I ever would have imagined.  I've just recently started feeling like me again.  That's due to finally finishing up on a lot of stuff, finally having some time to grieve the loss of my dad, watching some grief videos to figure it all out, and, finally, joining an Alzheimer's support group on Facebook.  I was surprised to find that was even a thing but it has helped me so much!  I don't feel alone in dealing with my mom's Alzheimer's and the things she does.  The support is amazing!  And, it feels so good to support others dealing with the same things.  And, I've gone from dealing with the mom I've been hurt by all these years and the anger of the time she robbed from me and my dad, to taking care of her with love and trying to bring joy into her life as long as we can.  It's a horrible disease!  It's nice to bring her happiness!

I composed a post several months ago about what all had happened with my dad and what we were all going through but it was tough to compose and I just couldn't bring myself to post it.  I'm not sure if I ever will. It feels good to be getting to the other side and feeling better.  It feels good to breathe deeply again and finally feel the stress start to melt away.

I hope you all had a happy Halloween!