I did it! I finally got around to getting a mammogram for this year. I just kept putting it off or this reason or that. Mostly because I just don't like getting them or the bit of worry afterwards as I wait for the results.
But, whenever I finally get it done, I reward myself with a bit of yarn.  This year I got this... 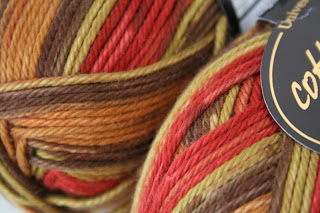 Isn't it pretty?  I just couldn't pass it up.  The colors are gorgeous and so fall-like.
Plus, it's cotton!  Cotton just put it over the top and made it totally irresistible. 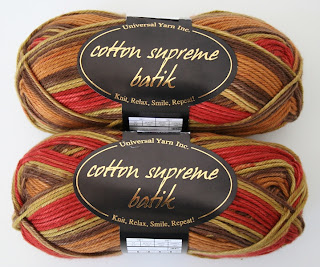 The yarn shop I visited shares space with a little antique shop.  While I was there, I also found this... 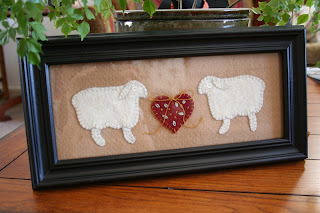 It's cute and it was on sale.  I ended up paying about $6 for it.  I thought it was one of those mass produced things that you'd normally find at Home Goods or somewhere like that and that it had somehow just made it into the antique shop.  But, I opened the back to remove a piece of lint and clean the glass and it looks like it's hand and home made.  It's a cut piece of felt with hand stitching and it's in a store bought frame with the mat and the picture label still inside.  If it is one-of-a-kind, that makes it an even nicer fine.

Time to get back to work on my dresser to buffet transformation.  The project is underway and looking amazing.  I hope to finish it soon and post pictures.  Have a wonderful day!
Posted by Acorn to Oak at 11:25 AM 9 comments:
Labels: fun finds, mammogram, yarn

As if we didn't have enough things to keep us happily occupied...we have now added something new...home brewing. We already knew we liked beer.  And, not just any standard, mainstream beer.  We like craft brew and all the adventurous flavors it comes in.  That makes home brewing perfect for us.  We can create flavors we like and experiment with new ones and countless combinations.  And, it turns out to be very affordable.  Aside from the small cost of a few pieces of equipment (thermometer, hydrometer, fermenting equipment, some bottles, sterilizer, etc.), the cost of making the beer is very inexpensive.  Many types of beer run close to $10 a six pack and higher.  Home brew can cost pennies per bottle.  Plus, you get more than just good beer to drink, you get the entertainment and fun of making it, the satisfaction of making it, and a good feeling of knowing exactly what's in it.


My husband cooked up a batch of IPA about a month ago
that we were able to start drinking this week.  It's so good! 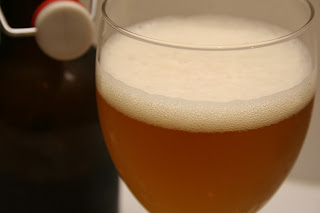 The initial stage of cooking took several hours but a lot of that time was just checking the
temperature and waiting.  Salsa loves to 'cook' and since it was beer...which she also likes...
she wasn't about to miss out on "helping" with this! 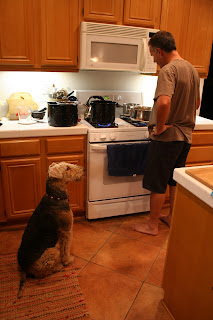 After cooking the mash, straining, rinsing, and boiling the wort, the fermenting began.
The next morning was very exciting!  It was alive!  The bubbles were coming out the tube like crazy and the bottle was full of movement.  That went on for a few days as the movement and bubbles slowed down.  Then, the tube was removed and an air lock was installed on the top of the bottle so gasses could still escape but it was still protected from the air.  We moved it into our pantry to ferment. 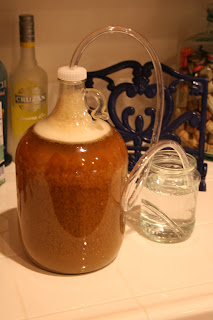 After two weeks, we added honey to create bubbles and bottled it.  The gallon jug filled seven bottles.  Then, it was another two week wait for the carbonation.  We stored the bottles in a plastic storage bin with a lid, just in case any of them were to explode.  We've heard of that happening and thought the bin could help contain the mess.  Luckily, that didn't happen. 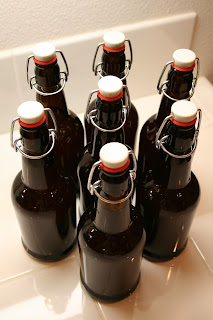 Two weeks later, we placed the bottles in the fridge to chill.  Then, it was tasting time.
Success!  It's delicious and the carbonation is perfect! 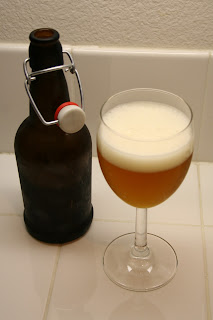 It was so much fun and the beer is so good that we're now hooked on home brewing. 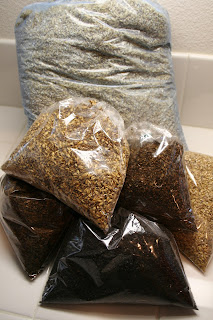 We're lucky to have a great, local shop that sells beer and wine making supplies.  The shop is "Brewliterate" in Canyon Lake, California.  They have a little shop in the town center and an online store as well.  They're prices are great and the owner is super helpful.

We went there this morning to watch a demonstration and bought some more supplies and ingredients to make several more batches of brew.  The grains smell so good.  I think they're pretty too....that made the owner chuckle a little when I said that but I think the colors are pretty and they're all natural, which is beautiful all in itself. 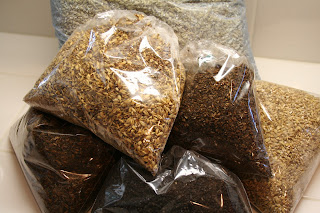 We bought two row malt, black malt, caramel malt, chocolate malt, honey malt, and roasted barley.  We're planning on making a stout this time that should have a rich flavor of coffee and chocolate.  We're brewing tonight.  Our house is about to be filled with the wonderful aroma that comes with it.
I can't wait. Mmmmm!
Posted by Acorn to Oak at 4:16 PM 11 comments:
Labels: beer, home brewing, IPA

I wove a scarf this week.  It was a quick and easy project and I'm pretty happy with the outcome. 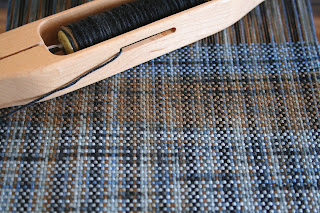 It all started a few months ago when I bought some yarn that I'd instantly fallen in love with and knew immediately that I wanted to weave with it.  The blues and browns are pretty.  The yarn is "Serenity Garden" and the colorway is "Twilight".   This project took two skeins for the warp and one and a half skeins for the weft.  It's done in plain weave with 12 ends per inch. 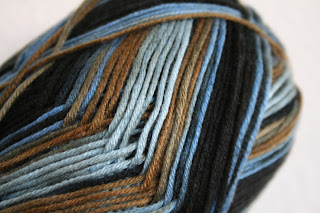 As I wove it, the colors in the yarn created stripes and a slight plaid-like feel. 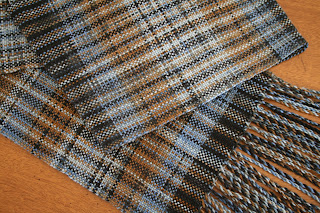 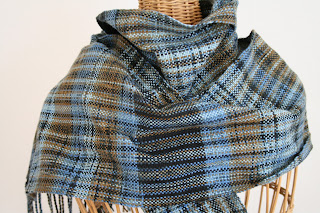 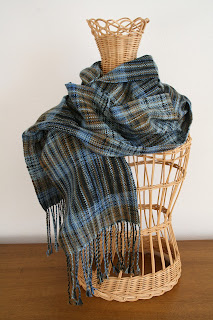 I love twisted fringe and have been wanting to try it for a long time.  I finally did it!  But, now I know why there are fringe twisting tools.  My fingers got tired very quickly from all the twisting. 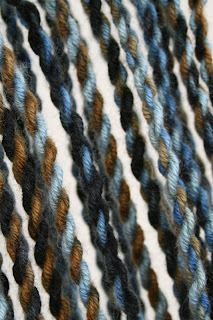